Be the boss that doesn’t require virtual for every meeting 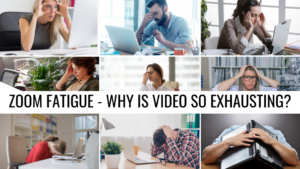 Just this week, I texted my colleague and said, “Do you want to skip Zoom for our meeting today? Let’s just talk on the phone.” He wrote me back in seconds with a resounding “YES” in all caps. Zoom fatigue is real and great leaders recognize it and they are doing something about it.

Before the pandemic Americans spent 5% of their working time at home. By spring 2020 the figure was 60%. A survey of 9,000 workers in six countries found that 72% prefer a hybrid remote-office model with only 12% preferring to always work in an office setting. They also found that 13% would like to always work from home if given the choice.

Whether employers are ready or not, remote work appears to be here to stay. Of course, there will always be those that prefer working in an office and many industries such as food, retail, and construction need workers on-site daily. But, it appears that Zoom calls are not going anywhere. Great leaders have to find ways to make sure their employees don’t get burned out with virtual meetings.

First, psychologists say that your brain has to work harder during virtual meetings. It’s harder to read people’s facial expressions and decode tone through a computer screen. Even though it isn’t something you consciously realize, it takes more effort to have conversations through Zoom than it does in real life. When engaging in such interaction, your brain has to create the illusion of eye contact while also mentally processing verbal communication. This is taxing on the brain!  Even with today’s advanced technology, there’s also still a slight delay for verbal responses during virtual connections. Scientists say that this can strain your ability to interpret the words of the person you’re talking with.

Second, you’re expected to be ‘on’ the entire time. There are some very weird expectations that come along with working from home, pandemic concerns aside. Some companies require their employees to dress as if they’re coming to work. Some kids have to wear their school uniforms in Zoom class! Then there are the random Slack calls that sometimes pop up, unannounced. It’s one thing to stroll into a conference room when you’re already in the office, but having to suddenly get yourself ready and your home presentable for an unexpected team meeting is completely different.

Thirdly, home life interference is real and it can be stressful. Sometimes your home life shows up during meetings and this can be really stressful! It can feel embarrassing or overwhelming (even though your boss is likely dealing with the same things). Having to walk your team through a budget meeting while your dog is barking, the UPS worker is ringing the doorbell, your toddler is crying, and your teens are arguing  can be way too much for even the biggest superstar to manage.

Researchers conducted a field experiment at a large US healthcare company. Participants consisted of 103 employees who worked in a variety of jobs within the company. Participants were assigned to one of two conditions: in the first condition, employees were asked to keep their cameras off for virtual meetings, and in the second condition, employees were asked to keep their cameras on for virtual meetings. At the end of the two-week mark of the study, participants switched conditions to either have their camera on or off. Employees in both conditions were surveyed daily over the course of four work weeks. Results indicated that when employees had their cameras on, they were more likely to feel fatigued, which subsequently contributed to decreased work engagement and the feeling that employees had less of a voice in meetings. Additionally, the researchers found that these effects were stronger for two groups of employees: women and organizational newcomers.

Bottom line – consider minimizing the need for Zoom and consider allowing the camera to be off at times.

If you want to learn more about running more productive Zoom meetings, reach out to Chris and his team!